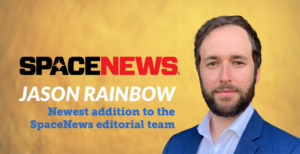 Rainbow has spent more than a decade covering the global space industry as a business journalist. Previously, he was Group Editor-in-Chief for Finance Information Group, including its industry publication Connectivity Business (formerly SatelliteFinance and TelecomFinance).

“Jason brings a wealth of experience and insight to SpaceNews during a period of accelerated change for the global space industry,” SpaceNews Editor-in-Chief Brian Berger said. “SpaceNews readers in print and online will benefit from his deep understanding of the forces reshaping the business environment for existing and emerging space players alike.”

“I am thrilled to be joining SpaceNews at this pivotal time for the global industry,” Rainbow said. “Innovative business models are being met with increasingly dynamic and available funding mechanisms, ushering in a new era as the sector seeks high-growth connectivity and data markets.”

SpaceNews has been covering the business and politics of space for government and industry professionals since 1989. Based in the United States, SpaceNews employs a global network of journalists to deliver timely, impartial, fact-filled news and analysis of government and commercial space programs.