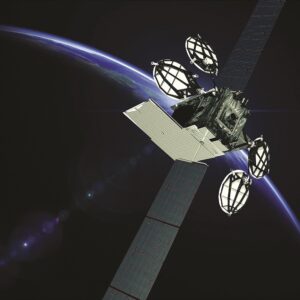 “We have a lot of maneuvering room,” Mark Dankberg, Viasat executive chairman, said Feb. 4 during an earnings call. “Our plans for service delivery are in the low single digit percentages of the U.S. market and most markets we go into. We don’t see those types of addressable markets changing for us much as a result of these things.”

Still, Viasat may rethink its approach, modifying service plans and prices, for example.

“It makes complete sense for us to do that in response to changes in the market as they unfold over what we think is a pretty long period of time, three to five years,” Dankberg said.

In recent years, Viasat has invested heavily in its three-satellite Viasat-3 constellation.

“We don’t expect to be in the same position after Viasat-3 is launched,” Dankberg said. “That creates more maneuvering room as well.”

Viasat’s average revenue per user (ARPU) for fixed broadband service reached a quarterly record in the third quarter of 2021, “driven by new and existing subscribers choosing plans with more data,” according to Viasat’s quarterly shareholder letter.

With limited capacity and strong demand, the company focused on raising ARPU. If that changes, “people should not just expect us to go after higher ARPU all the time,” said Viasat CEO Rick Baldridge. “We’re going to do what makes sense.”

The first Viasat-3 satellite to serve the Americas is likely to launch in early 2022.

“The recent spikes in COVID-19 during the holidays and early part of calendar 2021 have led to intermittent supply chain and labor availability challenges as we work to complete the payload for the first ViaSat-3 satellite,” according to the shareholder letter. “While we were able to offset some of these impacts with schedule gains in other areas, at this time we believe the net effect is that the launch of the first satellite will most likely move into [quarter one] of calendar 2022.”

When Viasat-3 Americas reaches orbit, the company will devote months to testing.

“We’ve got a very complicated overall system and we’ve got to go through pretty thorough testing,” Baldridge said.

Viasat plans to launch the second Viasat-3 satellite five to six months after the first one launched. The schedule for the third launch is not yet set.  “It may get a little closer behind the second one,” Baldridge said.

Awards to Viasat’s Government Systems segment declined 18% compared with the third quarter of 2020, while the segment’s year-to-date award total was 13% higher than at this time last year. The dichotomy reflects “inherent government contracting lumpiness and ongoing pandemic effects,” according to the shareholder letter.