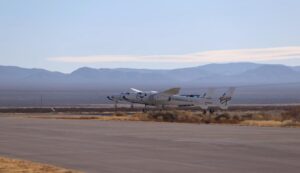 VSS Unity separated from WhiteKnightTwo at about 11:15 a.m. Eastern. According to a webcast from NASASpaceFlight.com, the spaceplane appeared to ignite its hybrid rocket engine but almost immediately shut it down. The vehicle then glided back to Spaceport America, landing at 11:27 a.m. Eastern, the company announced on Twitter. “Pilots and vehicles back safe and sound,” the company said.

“The ignition sequence for the rocket motor did not complete. Vehicle and crew are in great shape,” the company tweeted shortly after SpaceShipTwo landed. “We have several motors ready at Spaceport America. We will check the vehicle and be back to flight soon.”

Virgin Galactic did not disclose additional details about the abort. The company did not provide its own livestream of the flight and did not host media or other guests at the spaceport, restricting access to only essential personnel because of the pandemic.

The flight took place almost two years to the day after SpaceShipTwo’s first flight to space, from the Mojave Air and Space Port in California. Sturckow piloted that flight with Mark Stucky. The company made a second flight to space in February 2019, also from Mojave, with Mackay and Mike “Sooch” Masucci piloting the vehicle and Beth Moses, Virgin Galactic’s chief astronaut instructor, also on board.

The company then paused the powered test flight program to perform upgrades to the vehicle as well as outfit the cabin interior. Virgin Galactic relocated the vehicles to Spaceport America in New Mexico in February and conducted a series of captive carry and glide flights ahead of this powered flight attempt.