A longtime Virgin Galactic executive will return to Australia to take over the country’s young space agency, the Australian government announced Nov. 13.
SpaceNews 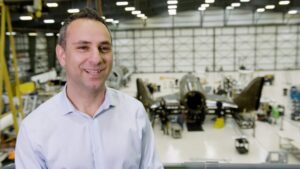 WASHINGTON — A longtime Virgin Galactic executive will return to Australia to take over the country’s young space agency, the Australian government announced Nov. 13.

In a statement, Australian Prime Minister Scott Morrison said that Enrico Palermo, chief operating officer of Virgin Galactic, will take over as head of the Australian Space Agency in January. Palermo will replace Megan Clark, who led the agency since it was formed in 2018 and will become chair of the agency’s advisory board.

Palermo is an Australian native who graduated from the University of Western Australia. He joined Virgin Galactic in 2006 as one of its first employees, originally based in London before moving to Mojave, California. He worked at The Spaceship Company, the Virgin Galactic subsidiary responsible for manufacturing the company’s SpaceShipTwo suborbital spaceplane, rising to president of that unit in 2018. He became chief operating officer of Virgin Galactic in January 2020.

“Palermo’s leadership will rocket Australia toward our goal of becoming a major player in the international space industry, while providing benefits across our economy,” Morrison said in the statement.

The Australian government established the space agency in 2018 to help grow the country’s space industry. The agency is charged with tripling the size of that industry to $12 billion Australian ($8.7 billion) by 2030. That work has featured efforts such as updates to the country’s commercial launch regulations enacted in 2019.

“Mr. Palermo’s skill set reflects the reality of the space sector, which is about so much more than just research or launch – it improves life on Earth and creates opportunities in a range of areas including manufacturing,” said Karen Andrews, the Australian minister for industry, science and technology, in a statement.

The Australian Space Agency has also worked to establish international partnerships, particularly with the United States. It signed an agreement with NASA in September 2019 to cooperate on the Artemis program, and the Australian government announced it would spend $150 million over five years to support that effort. Australia was also part of the initial set of eight countries that signed the Artemis Accords in October.

“In its first two years, the Australian Space Agency has made significant progress and achieved many firsts,” Palermo said in the government statement. “I look forward to working with the Agency team to continue the mission of growing and transforming Australia’s space industry.”

Virgin Galactic did not announce who would replace Palermo at the company, but stated in a filing with the Securities and Exchange Commission that Palermo’s resignation was effective Dec. 4.

“The Virgin Galactic team has had the pleasure of having Enrico Palermo serve our business for the past 14 years. He was the first employee in Mojave and has worked tirelessly to help develop and grow the company to where it is today,” Michael Colglazier, chief executive of Virgin Galactic, said in an emailed statement. “We are excited to see him take on the role as Head of the Australian Space Agency to grow space travel in Australia.”