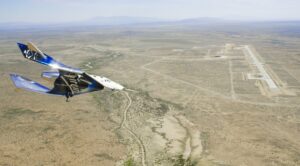 In a statement, Virgin Galactic said the window for its next SpaceShipTwo flight will open Feb. 13 at Spaceport America in New Mexico. The exact date of the flight will depend on “good weather conditions and technical readiness,” the company said.

The powered test flight will have two pilots on board, as well as research payloads for NASA’s Flight Opportunities program. The goal of the flight will be to exceed the altitude of 80 kilometers that Virgin Galactic uses as the boundary of space, the first time that SpaceShipTwo has done so since a February 2019 flight from the Mojave Air and Space Port in California.

Virgin Galactic had planned to conduct this test flight in December. Moments after the spaceplane’s release from the WhiteKnightTwo aircraft Dec. 12, its hybrid rocket motor ignited but almost immediately shut down. SpaceShipTwo glided to a safe landing at Spaceport America.

The company said that a computer lost connection at the time of ignition, triggering the engine shutdown. “The team has since conducted the root cause analysis, completed the corrective work required, and carried out extensive ground testing,” it stated in the announcement of the upcoming flight, but did not disclose additional details about those efforts.

“We are pleased to be able to get back to the skies and continue our flight test program,” Michael Colglazier, chief executive of Virgin Galactic, said in the statement.

As with the December test, Virgin Galactic will have only essential personnel at the spaceport for the test, with no media or guests in attendance, citing COVID-19 protocols by both the company and the state of New Mexico. Sierra County, where Spaceport America is located, is in the middle or “yellow” tier of the state’s framework of restrictions on businesses and other activities, intended to reduce the spread of COVID-19.

The upcoming flight is the first of three Virgin Galactic outlined during an earnings call in November. A second flight would carry two pilots as well as four additional employees to test the cabin interior and the “weightless experience in space” in advance of carrying customers. A third would fly the company’s founder, Richard Branson, who long said he would be on the company’s first commercial flight.

At the time of that call, Virgin Galactic thought it would be able to fly the second and third flights in that sequence in the first quarter of 2021, with the first flight scheduled for November. The company did not update that schedule in the announcement of the upcoming flight. The company will hold its next earnings call, tied to the release of its fourth quarter and full year financial results, Feb. 25.