With its first successful launch in the books, Virgin Orbit is considering ways it can expand into adjacent markets, including supporting ventures developing satellite systems.
SpaceNews 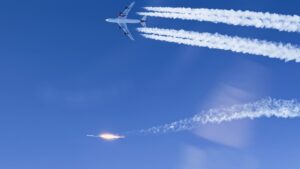 WASHINGTON — With its first successful launch in the books, Virgin Orbit is considering ways it can expand into adjacent markets, including supporting ventures developing satellite systems.

During a keynote presentation at the SmallSat Symposium Feb. 10, Dan Hart, president and chief executive of Virgin Orbit, said that the success of its Launch Demo 2 mission Jan. 17 has resulted in a lot of inquiries about potential business opportunities.

“We have a pretty expansive evolution of the company planned,” he said. “We’re evaluating right now, with the success, lots of possibilities and, frankly, we’re getting lots of queries.”

His comments came in response to a question about the company’s investment last year in Sky and Space Global, a startup developing a communications satellite constellation, after that company filed for voluntary administration, a form of bankruptcy, in Australia, where the company’s stock is public traded. Virgin Orbit acquired a modest stake in that company in exchange for a “launch services and consulting agreement.”

“Launch is a cornerstone of space access and the whole space ecosystem,” Hart said, but that the company was looking to “flex into adjacencies” like the Sky and Space Global, or SAS, deal. “There is a plethora of space adjacencies in other aspects of national security or in commercial turnkey systems like SAS is going after.”

Richard Branson, founder of Virgin Orbit’s parent company, Virgin Group, suggested the company might make similar deals like it did with Sky and Space Global. “There will be a lot of people who do approach the company with wonderful ideas to put satellites into space, but just can’t afford it,” he said.

Virgin Orbit could take the role of “helping them get their project off the ground, maybe take a stake in the company, and get their satellites into orbit,” he suggested. “That’s the kind of entrepreneurial thing Virgin Orbit should be doing.”

A key differentiator for Virgin Orbit in the crowded small launch vehicle industry is its air-launch capability, including operating from a wide range of airports and launching to any inclination. “We want to be able to launch from any part of the world,” Branson said. That includes a launch from Cornwall Airport Newquay, also known as Spaceport Cornwall, in England in 2022.

He particularly emphasized military applications of LauncherOne. “What makes this particularly unique is our capability for the U.S. Air Force or the British air force or the Canadian air force or the French air force, all of whom have been encouraging and working with us over the last two or three years,” he said. Virgin Orbit, he argued, “could give them an extreme deterrent capability so, if they were to lose satellites anywhere in the world, they can be replaced incredibly quickly.”

Those plans are enabled by the success of the Launch Demo 2 mission, which placed 10 NASA-sponsored cubesats into orbit. “It went better than anybody could have ever dreamed. Every part of the system came together,” Hart said of the launch.

Hart didn’t give any details about plans for the next launch, but in a separate panel session at the conference Feb. 9, Stephen Eisele, vice president at Virgin Orbit, said that launch would take place in “a few months,” carrying payloads for the U.S. Air Force, Dutch air force and Polish satellite developer SatRevolution.