Virgin Orbit is preparing to perform a second flight of its LauncherOne small launch vehicle in the second half of December, carrying a set of NASA-sponsored cubesats.
SpaceNews 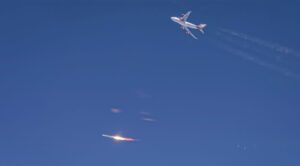 WASHINGTON — Virgin Orbit is preparing to perform a second flight of its LauncherOne small launch vehicle in the second half of December, carrying a set of NASA-sponsored cubesats.

A Nov. 24 “Local Notice to Mariners” by the U.S. Coast Guard stated that Virgin Orbit “will conduct hazardous operations” offshore from San Nicolas Island, California, between Dec. 18 and 21. Those operations will take place during a four-hour window that opens at 1 p.m. Eastern.

The notice does not explicitly state that a launch will take place, but Virgin Orbit used the same language in a Coast Guard notice for its first orbital launch attempt in May. That earlier notice, which also cited “hazardous operations,” had the same four-hour window and location for the operations.

The company has not announced a formal launch date yet, but has stated it intends to carry out a second launch before the end of the year. The company shipped the LauncherOne rocket for what it calls the Launch Demo 2 mission from its factory in Long Beach, California, to the Mojave Air and Space Port earlier this month. Technicians then mated the rocket to the company’s Boeing 747 carrier aircraft, according to a Nov. 13 update by the company.

The first LauncherOne launch May 25 failed when the rocket’s NewtonThree first-stage engine shut down several seconds after ignition. The company determined that a liquid oxygen propellant line failed, causing the engine to shut down. The flight had been going as expected up until that point, company officials said, including the release of the rocket from the 747 and ignition of the engine.

While that first launch did not carry a payload, the upcoming Launch Demo 2 mission will carry 10 cubesats, most of which are university-built satellites sponsored by NASA’s CubeSat Launch Initiative program. The launch itself is under a Venture Class Launch Services contract NASA awarded in 2015 to demonstrate new small launch vehicles.

Virgin Orbit is not the only small launch vehicle developer attempting to reach orbit in December. Astra announced Nov. 19 it will perform its second orbital launch attempt during a 12-day window that opens Dec. 7 at Pacific Spaceport Complex – Alaska on Kodiak Island. Astra’s vehicle, Rocket 3.2, is similar to the Rocket 3.1 vehicle that failed to reach orbit during a launch Sept. 11 from Kodiak.

A third small launch vehicle developer, Firefly Aerospace, had been targeting December for the first launch of its Alpha small launch vehicle from Vandenberg Air Force Base in California. However, that launch is now expected no earlier than January, said Col. Anthony Mastalir, commander of the 30th Space Wing, during a briefing earlier this month.

Rocket Lab announced Nov. 24 that the next launch of its Electron small launch vehicle is scheduled for a 14-day window that opens Dec. 12 from the company’s New Zealand launch site. That launch will be a dedicated mission for Japanese company Synspective, carrying its StriX-α synthetic aperture radar satellite.