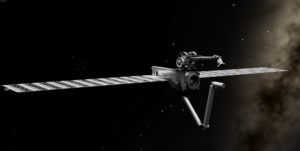 Stallmer previously ran the Commercial Spaceflight Federation, a space industry trade group. He said Voyager eventually will open a D.C. office but plans are on hold for now because of the pandemic.

Space industry angel investor Dylan Taylor is the company’s chairman and CEO. He founded Voyager Space Holdings in October 2019 with the goal of making long-term investments in space companies, providing an alternative to traditional venture funding.

“We have some portfolio companies, and we’re going to have a few more in the near future,” said Stallmer.

One of his roles will be to help Voyager’s companies deal with the federal government. Stallmer said he will also be involved in the “due diligence process as we look at more acquisitions of other companies.”

“There’s a lot of conversations happening,” Stallmer said. “Voyager wants to be a vertically integrated space company. To do that you need a lot of pieces to that puzzle,” he added. “Nothing is off the table.”

Many of the companies Voyager is looking at are NASA and Defense Department contractors.

Voyager’s investors “are looking for consistency, and they are looking for safe places to invest,” he said. “I think it would be wise to look at some of these companies that are working with the DoD.”

“We’re really looking at the whole ecosystem of space — from smallsats to the ground systems and launch,” Stallmer said.

The incoming Biden administration will review all agencies’ budgets and some categories of spending will come under scrutiny, but space programs are expected to continue to receive healthy funding, Stallmer said. “The importance of space is increasing,” he said. “It’s a bipartisan issue.”

In a tweet Nov. 16, Taylor said a wave of corporate mergers and acquisitions in the space sector is coming. “2020 has been the ‘year of the exit’ for the space industry,” Taylor wrote. “I expect much more to come in 2021. The industry consolidation is just getting started.”