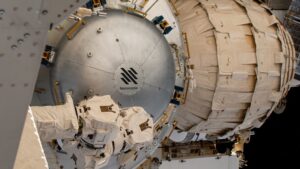 Voyager announced it would take a majority stake in XO Markets, the parent company of Nanoracks. The companies did not disclose terms of the agreement. “Voyager is contributing capital in this transaction and future based on needs, allowing us to meet future demands,” Jeff Manber, chief executive of Nanoracks, said in response to questions about the specifics of the agreement.

Nanoracks announced in September that it was working on a $20 million funding round in cooperation with investment bank Cambridge Wilkinson to support its future activities. Nanoracks spokesperson Abby Dickes said the Voyager agreement is in place of that round. “Nanoracks elected for longer term scalability with the Voyager team, rather than a straight Series B,” she said.

Nanoracks, founded in 2009, started by flying experiments to the International Space Station. It expanded to satellite deployment, arranging to fly cubesats and other small satellites to the ISS to be deployed from a Japanese airlock there.

Demand for those satellite deployment services led Nanoracks to pursue development of Bishop, a commercial airlock that can be used for releasing satellites and hosting experiments. Bishop was flown to the station on a SpaceX commercial cargo mission earlier this month, and attached to the station by the Canadarm2 robotic arm Dec. 19.

“Over the past decade my team and I have worked to grow Nanoracks from a garage-based startup into the first commercial space company with customers,” Manber said in a statement about the deal with Voyager. “With Voyager, we’re confident in our expanded team’s ability to continue to deliver game-changing technology industry-wide.”

Nanoracks has discussed long-term plans to develop commercial space stations through its Outpost program, where it converts upper stages of launch vehicles into modules. Nanoracks plans to conduct its first in-space test of that technology in 2021.

The concept of converting upper stages into space station modules is not new, but Nanoracks believes that advances in robotic technologies could allow such conversions to be done with a minimum of human labor. The concept also got an endorsement in the report accompanying the fiscal year 2021 omnibus spending bill passed by Congress Dec. 21, which directs NASA to conduct “an assessment of the benefits and challenges of using repurposed upper stages as free-flying platforms.”

The agreement to take a majority stake in Nanoracks is the fourth acquisition by Voyager Space Holding since it started in October 2019. It previously acquired space technology companies Altius Space Machines and Pioneer Astronautics. In November, it acquired The Launch Company, a provider of rocket and spacecraft components, and ground equipment for launch sites.

The Nanoracks deal fits into Voyager’s approach to acquire later-stage companies generating significant revenue, rather than startups. Voyager offers those companies access to long-term funding as well as shared infrastructure, such as human resources.

“Our model is best suited for companies like Nanoracks, who are at the forefront of innovation and growing rapidly,” Matthew Kuta, president and chief operating officer of Voyager, said in a statement. “With Voyager’s support, Nanoracks can continue to do what it does best: develop in-space services and technology that is poised to transform life on Earth and in space.”