A critical test of the core stage of the Space Launch System is facing another delay, this time because of a combination of weather and technical issues that may push back the test to the end of the year.
SpaceNews 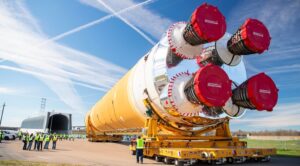 WASHINGTON — A critical test of the core stage of the Space Launch System is facing another delay, this time because of a combination of weather and technical issues that may push back the test to the end of the year.

NASA announced late Nov. 6 that it was delaying the final phases of the Green Run test of the SLS core stage, including a full-duration static-fire test of its four engines. That test had been scheduled for mid-November, a date confirmed by officials with NASA and Boeing, the SLS prime contractor, less than a month earlier.

One reason for this slip was Hurricane Zeta, which passed near the Stennis Space Center in Mississippi, where the Green Run tests are taking place, Oct. 28. While the hurricane did not damage the core stage or its test stand, it did cause damage elsewhere at the center and in the community. Some center employees, NASA stated, had not been able to return to work as they dealt with power outages and damage to their homes.

A second reason for the delay is a technical issue with the vehicle. NASA said that one of eight valves that supply liquid hydrogen to the stage’s four RS-25 engines had “inconsistent performance” during earlier tests. Engineers will replace the valve before proceeding with the final two Green Run tests, a “wet dress rehearsal” where the stage is filled with liquid hydrogen and liquid oxygen propellants, and the hotfire test where the four engines are fired for eight minutes.

NASA did not state specifically when those final two Green Run tests will take place beyond the goal of completing them this year. “Following a successful repair, the team plans to conduct the Green Run wet dress rehearsal and hot fire testing before the end of the year,” the agency said in its statement.

NASA Deputy Administrator Jim Morhard, speaking Nov. 7 at the SpaceGen Summit conference by the Space Generation Advisory Council, also declined to give a specific date for the tests. “We certainly continue to make sure that everything is going to go right when we light up all four engines of the Space Launch System,” he said.

A significant delay, though, could have ripple effects that would affect the first SLS mission, Artemis-1, scheduled for November 2021. At an Oct. 13 media briefing, John Honeycutt, NASA SLS program manager, said they had 20 to 25 days of margin in a schedule that called for shipping the SLS core stage from Stennis to the Kennedy Space Center in mid-January. At the time of that briefing, the hotfire test was scheduled for Nov. 14.

Honeycutt said at the briefing that the SLS core stage was on the critical path for the Artemis-1 mission, and thus any delays with its testing and delivery would delay the mission. The other components of the SLS, such as the segments for its two solid-rocket boosters and its upper stage, as well as the Orion spacecraft, are already at KSC being prepared for launch.

The core stage arrived at Stennis in early January with the hope of completing the Green Run tests in the summer. However, Stennis was shut down in March for more than two months because of the coronavirus pandemic. Weather contributed to more recent delays: Zeta was the sixth tropical storm or hurricane to come close enough to Stennis to halt Green Run activities.