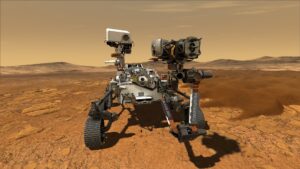 The National Strategy for Planetary Protection, developed by an interagency working group led by the National Space Council and Office of Science and Technology Policy (OSTP), outlines work to be done over the next year to update planetary protection policies, considering both scientific advances as well as growing private capabilities in space exploration.

The strategy is designed to implement a portion of the updated National Space Policy, released Dec. 9, that calls on OSTP, in cooperation with NASA and other agencies, to develop new planetary protection guidelines “working with scientific, commercial, and international partners, for the appropriate protection of planetary bodies and Earth from harmful biological contamination.”

“Current and future missions to Mars and other destinations necessitate a strategy to support a safe, sustainable, and predictable Earth and space environment,” Scott Pace, executive secretary of the National Space Council, said in a statement. “By establishing objectives for the implementation of the 2020 National Space Policy’s direction on planetary protection, this strategy continues American leadership in scientific discovery, human exploration, and private sector space activities.”

A third objective seeks to incorporate private sector views on planetary protection issues given the growing capabilities of, and interest by, companies in flying missions to other worlds, in particular Mars. That objective includes work by the government to develop guidelines for authorization and continuing supervision of private sector missions to destinations with planetary protection implications.

“We’re very fine with what NASA has done, but the problem is that the NASA rules and interim directives don’t really apply to the private sector,” said the administration official. The strategy follows what the official described as a “light touch” approach for any planetary protection regulations for private missions. “We’re trying to find ways so that people can go forward, but to do so safely.”

The strategy also seeks to leverage the expertise of other agencies. The interagency working group included several Cabinet-level departments, from Agriculture and Health and Human Services to Commerce and State. It also included the Centers for Disease Control, Environmental Protection Agency and the Federal Aviation Administration, among others.

Many of them were brought in to support work on backward contamination. “It’s a great opportunity to bring in departments and agencies who may not have worked together on this issue historically,” said an administration official, “but are very excited to be doing so now.”

“There’s really no reason for the space guys to reinvent the wheel. There’s tons of great expertise out there,” an official added.

The planetary protection strategy is part of a surge of space policy activity by the White House in the final weeks of the Trump administration. In addition to the updated National Space Policy, the White House released a space nuclear strategy Dec. 16, outlining priorities for development of nuclear power and propulsion capabilities and related policy issues.