“We are not revisiting the decision to establish the Space Force,” said White House Press Secretary Jen Psaki.
SpaceNews 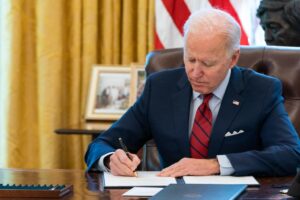 WASHINGTON — White House Press Secretary Jen Psaki for a second consecutive day had to answer questions on the U.S. Space Force at her daily briefing.

Psaki on Wednesday finally had a response to the question of what President Biden plans to do with the Space Force.

The Space Force “absolutely has the full support of the Biden administration. And we are not revisiting the decision to establish the Space Force,” Psaki said.

Psaki was criticized after her Feb. 2 briefing when she made light of a reporter’s question on what decisions Biden would make on the Space Force, suggesting the issue was not sufficiently important for the president to be concerned about. Psaki told the reporter that she would “check with our Space Force point of contact” for an update.

Following the briefing, the top Republican on the House Armed Services Committee Rep. Mike Rogers (R-AL) asked the White House to “immediately apologize” for what he called Psaki’s “disgraceful comment” on the Space Force, according to Politico.

Psaki did not apologize but in a tweet Tuesday evening she invited  the members of Space Force to the White House briefing room to talk about “the important work they’re doing.”

At the Wednesday briefing Psaki said the administration supports the Space Force given the “desire for the Department of Defense to focus greater attention and resources on the growing security challenges in space.” She noted this “has long been a bipartisan issue informed by numerous independent commissions and studies conducted across multiple administrations.”

During a video call with reporters on Wednesday, the chief of space operations Gen. John Raymond was asked to comment on Psaki’s invitation. His response: “I’m very proud of the guardians in the Space Force. I see the value of this force each and every day and I’m happy to talk to anybody about the great work that we’re doing.”

While Psaki had an answer to the Space Force question on Wednesday, she could not however address Biden’s position on NASA’s Artemis program to send astronauts to the moon.

“I am personally interested in space,” said Psaki. “I think it’s a fascinating area study, but I have not spoken with our team about this particular program so let me see if we can get you a more informed overview of that.”