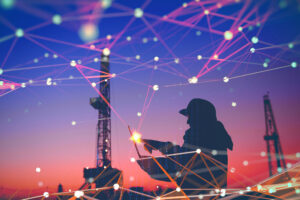 “How do you make lots of different satellites work together successfully, and securely at the same time?” asked Duncan Greatwood, CEO of Xage (pronounced Zage).

Xage’s work for the Space Force is analogous to work the company performs for oil and gas companies to ensure oil pads can operate both independently and as part of a network, Greatwood told SpaceNews.

Xage, founded in 2017, offers Security Fabric, a collection of software programs designed to communicate with each other. Security Fabric relies on blockchain technology to verify access to individual nodes in a network and ensure data provided by the network is trustworthy.

The company’s cybersecurity approach will be particularly useful for satellite networks, which change continually as spacecraft move in and out of view of ground stations, Greatwood said.

“Each element in the space network has to be able to make security decisions,” Greatwood said. “Can I let that application access that particular data? Can I let that other satellite communicate with me or is it potentially a rogue satellite?”

Xage began working with AFWERX in late 2019 under a phase one SBIR contract worth about $50,000.

With the latest award, Xage will evaluate, design and create a strategy to apply its data security approach to space architectures, Greatwood said.

“The ultimate goal here is to be able to bring this level of protection to space because you will get improvements in operational capabilities and also pretty significant cyber-risk reduction once no single point can be hacked to gain access the network,” he added.

Government and commercial organizations are focusing increasingly on cybersecurity for space networks. The Trump Administration’s Space Policy Directive 5 released Sept. 4 outlines a set of best practices for agencies and companies to follow to safeguard space systems from hacking and other cyber threats.